I am building a VANS RV-4 aircraft. If your not involved in homebuilt aircraft it wont be too interesting, but if you are a part of that elite group it just might be. My intention is to include ONLY the interesting details, so the rate of change will be quite slow! 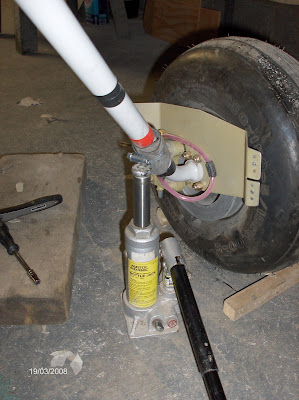 I am getting down to a shorter list of tasks before the wings are installed for the last time. I am beginning to get to the items on the list I either don't know how to do, or don't want to do.

I had forgotten to drill the axles for the cotter pins earlier in the build so now I have to do it scrabbling around on the floor, which is the bit I don't like. I had an additional problem in that I had no idea how to lift a wheel off the ground so I could set the tension in the bearing. I am sure it has been done before this way but I have never seen it mentioned. I simply wrapped a bit of old car inner tube around the leg to protect it, and tightened a jubilee clip around that. It could not have been cheaper or simpler. There is no risk of an accident because the wheel is only just off the ground.
I thought the jubilee clip might distort but its fine. I think I will put the jubilee and inner tube in my travel kit, together with a spare inner tube. I will borrow a bottle jack when I have the need. Its heavy!
# posted by Retro @ 6:21 pm 0 comments

The Panel is nearly complete 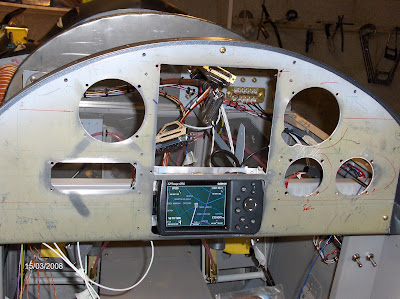 The panel is nearly complete. All the holes are cut, it now needs holes for the flap switch and fuel pump and some warning LEDs. I am pleased that I have managed to reduce it to just two switches necessary in flight, rather than the ergonomic nightmares that so many prefer.
Delays in obtaining the radio, transponder and intercom, caused me to push ahead without them, which was of course a mistake.
However, it has all worked out for the best. Although I could squeeze the intercom onto the panel, it made me rethink things through, when I realised it would be very crowded.
The result of the rethink is that I have decided the intercom would be better placed out of the way, below the two mag. switches you can see in the sidewall rib. (Bottom right in the picture.) On the electrics page you can see where it will fit a little more easily.
I still don't have the intercom, I am waiting on Spruce. It never occurred to me how deep it would be, which was the major problem.
I have spent a lot of time building the mount for the GPS. I finally have it as I want it. Three attempts. It is angled up so it is almost square to my line of sight. It was hard to fit it in because the panel is small and the AFS3400 which will sit above it leaves very little room. 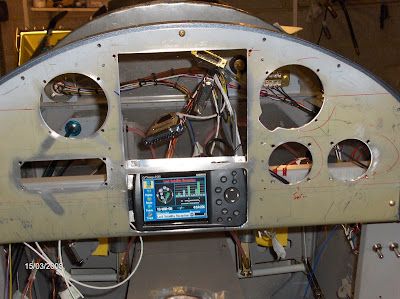 The GPS gets quite a strong signal inside my workshop. It has a tin roof. I wonder how that works?